A downloadable game for Windows, macOS, Linux, and Android

In a collapsed world two people try to survive. But their history can't end well. What happened to them? Why are they escaping? And what is Violet?

- A faux BL story without a happy end

- No sprites, CGs only

The game features: a bit of violence resulting in injury [nothing graphic, mostly the text with no details], the use of an unspecified drug [once], the use of poison.

hey there creator! i just downloaded this game but haven't played it yet. I'm planning to do it now uwu

if i might ask, are you planning to make more games?

have a nice day, creator :D your games are the greatest and always well written <3

edit : played the the game and my tears was back again 〒_〒 even if its short :D it was great and amazing! well written and good characters. I love how it have different endings, which made a short novel better. If you are asking, this game if obv recommend! but if you are not a fan of bad ending so just skip this one. I hope you make more games like this! now i gotta download more of your games (´∀｀)♡

Definitely! I hope you'll look forward to them X3

It is always exciting for me to see that you have released 1 or 2 new games every time I check back with Itch! I love all your games so far & have been following you since Hexed Pet Hamster was in development. Your games are the ones I go to 1st. whenever I don't feel like playing NSFW because they are well written, have great artwork, & music as well. I am looking forward to this VN after I play Mixed feelings which I just bought cause I like to only play one VN at a time. Have a great week & may your creative juices never stop flowing...

Thank you so much! It means a lot to me! I hope you have a great week as well UwU

I'm also a huge anti-fan of bad endings. I don't even bother with bad endings in any visual novel I play. (missing cgs or not. lol) I need fluff or happy endings. (life is to depressive as it is.) So I'll skip. But still wanted to express my support. Good luck to Awiola and ChaniMK. =)

I understand~ Thank you for your support as always <333

well,i'm not a fan of the  "bad end" style.So sadly i'll skip this one.lol See ya in the next work <3

My solo projects are definitely going to have happy endings! I'll be releasing some of them real soon!

Okay, that made me laugh. Glad to know you liked Volk.

I was so happy until I read without happy ending ah, ah.

Not for me. I accept the angst if I have the happy ending. Let's meet again in your next game ~.

XDXD This was just a short angst I made with a friend. My upcoming solo projects will definitely have a happy ending! X3

The small amount of hope you gave in that one choice only to take it all away... savage 😔

A lovely short game, I'm happy to finally play it!

I did blabber about this just now, but I'll write it here too (sorry if it's going to be lengthy).

The amount of me going "Oh noooo 😂" for every route is.. a lot, surprisingly. I came in with no expectation of what's going to hit me except that I didn't expect them to live happily together, but I find the whole plot entertaining and none of Zayats' action/consequence options being half-soft. My least favorite ending is the boom one because it's the least deranged (??? definitely weird thing to say) and most vanilla to me, personally, but it's not bad in itself.

I read about having only CGs and no sprite and was questioning about it at first, but apparently it worked and I can still figure out who is talking since there's only two casts. Their emotions are well-delivered through their expressions, so more reason for me to feel emo. They don't look very intense, but that also shows that after a while, the whole situation becomes tiring to deal for them to keep pushing or to even hope that super good things will happen.
I'm curious about what's going to happen after Volk's illness completely overtaken his body or how he would look like, but I guess it's for the best that... we did not know...

Main menu and quick menu GUI are well-thought and neat, especially when there's only one week. I'm also a fan of CG lists on main menu.

You guys did it! Have a good rest! Very fun stuff. 🙌 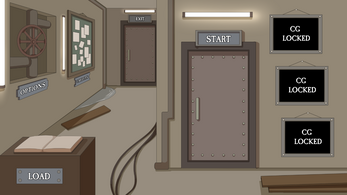 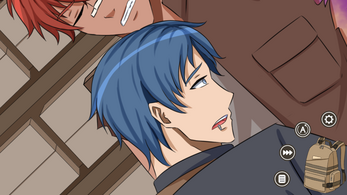 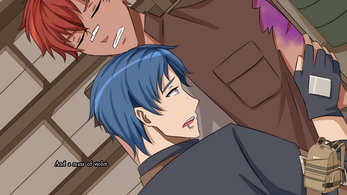 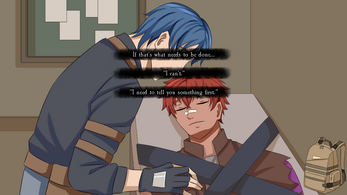